The Group of Seven (G-7) is an international intergovernmental economic organization consisting of the world’s 7 most developed and advanced economies (Canada, France, Germany, Italy, Britain, Japan and the United States). G7 Ki Sthapna Kab Hui I would like to tell you that, this group was established in the year 1975 by 6 richest and powerful countries. The group was renamed G-8 after Russia joined in 1997, but was later suspended.

There are more than 190 countries in the whole world. Some countries are very big and powerful while some countries are small and less developed. Many countries have formed small groups like SAARC, ASEAN, G20, BRICS, G7 etc. to help each other on their cultural, economic etc. and from time to time these countries exchange their views. They keep meeting to provide, solve problems and help each other.

Apart from its member countries, India, Australia, South Korea and South Africa were invited as guest countries to the 47th G7 summit held in June 2021. This topic becomes very important for any competitive exam because of India participating in this conference.

So today we are going to tell you complete information about G7 through this post like- what is G7, when G7 was established, G7 Me Kitne Desh Hai and G7 Ka Mukhyalay Kahan Hai etc. Just end this post of ours. Read till 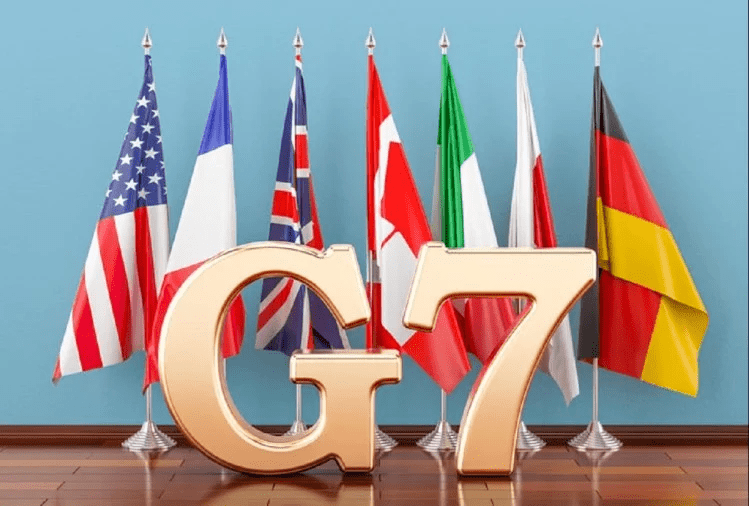 G7 Ka Full Form or G-7 means “Group of Seven”. The G7 is an international intergovernmental organization comprising the seven largest countries in the world. With the largest economy, they contribute more than 58% to the global net worth ($317 trillion in global net worth). Apart from this, the GDP of G7 country is 32% of the total GDP of the world. The European Union has also been invited to the G-7, apart from this, these countries continue to invite different countries under the G8+5.

did you read this: What is NASA? NASA Ki Sthapna Kab Hui – Know NASA History In Hindi!

G-7 Ki Sthapna was done in the year 1975 but at that time there were only 6 countries in it, hence it was known as G6. But with the joining of Canada in 1976, the number of its member countries increased to seven and its name became G7.

Now you know that, G7 Ki Sthapna Kab Hui Thi but do you know how many countries are included in G7 or Kaun Sa Desh G7 Ka Sadasya Nahin Hai, so let us now know about it further.

At present the number of G7 Ke Sadasya countries is seven. Before that it was also a group of G6 and G8. Russia was suspended from the G8 group of countries in March 2014.

If a question related to G7 Ka Headquarters Kahan Hai is coming in your mind, then you have been told about it further.

G7 Ka Headquarters or G7 Headquarters is not yet certain. Every year in the country where the G-7 summit is to be held, its head office is made there till the next conference. In 2020, the 46th summit of the G7 was held in the US. Last year the 47th G7 summit took place in the UK in June 2021 and this is the headquarters of the G7 for 2021.

The G-7 summit is held annually in its seven member states on a rotational basis. In the year 2021, the UK got its presidency, which was organized in Cornwell, England.

This was important information related to G7 Headquarters In Hindi, let us now tell you the names of the member countries of G-7 along with their capital and currency.

G7 Country Names with their capitals and currency are shown below:

Do read this also: What is WHO? What is the history of WHO and its purpose in Hindi!

What is G7 Summit

During the 1973 oil crisis, members of the Organization of the Petroleum Exporting Countries (OPEC) increased oil prices and cut supplies to countries that supported Israel in the Yom Kippur War. Then inspired by this, the G-7 was formed to discuss economic and political issues.

Since the oil crisis, the group has expanded to cover a wide range of international issues such as energy, security, climate change, poverty, trade, etc. In today’s time, the G7 member countries are considered to be the richest and developed in the world, apart from this some of the major features of G-7 are listed below:

G7 Me Shamil Desh also invites other international organizations to its summit every year. The names of the organizations that have been invited since the first meeting of 1975 till now 47th G7 Ki Baithak 2021 are shown below:

Have a look at this too: What is FATCA? The main purpose of FATCA and what are its benefits!

India also participated in the annual meeting of G7 Countries 2021. That’s why many people think that India is also included in the G7 countries. But as we have told you above, G-7 countries also invite some guests in every meeting and this year India and other countries were invited by G-7 countries as guests.

Friends, today we have given you G7 Sammelan Kya Hai, when was G7 established and G7 Ka Mukhyalay Kahan Per Hai? etc. Almost all the important information is provided. If you have any question related to G7 Ki Jankari then you must tell us in comment, we will try our best to help you. If you liked the post, don’t forget to share it with others.

At present, the number of member countries of the G7 is seven, which includes Germany, Italy, Canada, France, Japan, the United Kingdom and the United States of America.

Germany will host the G7 summit 2022. The G7 summit is expected to take place in the Bavarian Alps in June 2022.