do you know Who has the most subscriber on YouTube If you do not know in India, then today we are going to tell you about its top 10 list 2021, so that you will also get to know about the world’s most subscribed channel. Before this, let us tell you that YouTube has become such a platform in which millions of videos are uploaded every day and the biggest thing in this is that any video can be uploaded in it, for this you only need a Gmail ID. This is the reason that millions of people are joining YouTube every day, while talking about its users, it has about 1.5 billion users, which makes it the world’s largest online video platform. 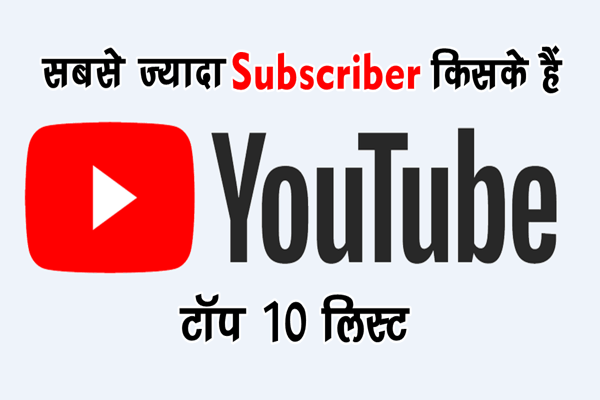 The site was created by Jawed Karim, Steve Chen, and Chad Hurley and was launched on February 14, 2005. These three friends used to work together in Paypal earlier. Even though YouTube is now known as an online video platform, this site was created for online dating.

For your information, let us tell you that YouTube is a product of Google, which was bought by Google in the year 2006 for $ 1 billion 650 million. At that time it was one of the largest online deals in the world. Now many people are looking at YouTube as a career because uploading videos in it also earns money. This site does not require any degree, to upload videos, you must have a Gmail ID, which is made very easily.

There are millions of such creators in YouTube who are earning millions of crores every month, so this site is also emerging as an online business. Although this site did not get much success in the beginning, but when Google bought this site and added it to its system, its Subscriber has been increasing since then. Today, in this site you will get to see videos on every topic, now this site has become a popular site and all the credit goes to the three friends who made it and the team of Google.

At present, there was a competition to move forward on two channels to remain the most subscriber channel in YouTube, the first name comes from Pewdiepie which was ruling YouTube for many years while the second channel comes from India whose name is T- Series is. Both these channels have completed 100 million Subscribers. But the pace at which T-series is growing, T-Series will continue to be the No. 1 channel in the coming times. And currently T series has become the number 1 channel. So you can see the top 10 list of most subscribed YouTube channel below. 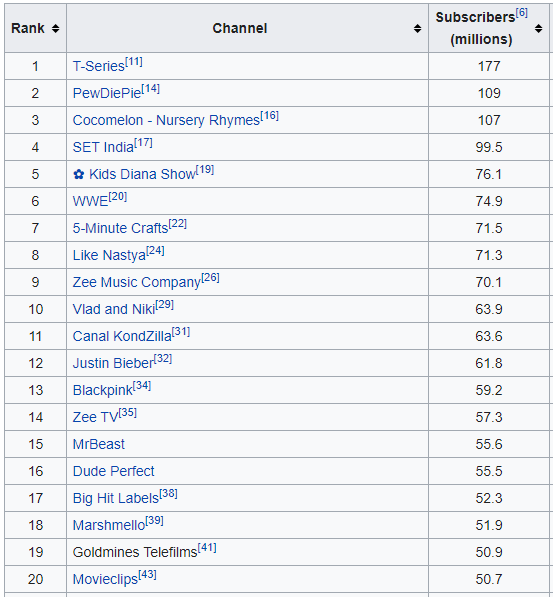 2. PewDiePie is a gamer and comedy channel with 109 million subscribers.

3. Cocomelon – Nursery Rhymes 107 Million Subscribers This is a channel related to education.

5. Kids Diana Show 76 Million Subscribers This is an entertainment channel.

6. WWE 74 Million Subscribers WWE videos are uploaded on this channel.

7. 5 Minute Craft 71 Million Subscribers This is a channel based on How to category.

8. Like Nastya 71 Million Subscriber This is also an entertainment channel.

10. Vlad and Nikki 63 million subscribers, entertainment videos are also uploaded in this.

So now you know that Who has the most subscriber on YouTube Above you have been told the list of top 10 most subscribed YouTube channel. This will increase your general knowledge a lot. Talking about the channels of India, due to the arrival of Jio, there has been a lot of progress in them. Two Indian channels T-Series and SET India are included in this list. Like T-Series, SET India is also growing very fast. For a long time, T-Series and PewDiePie were competing to outdo each other. In which T-Series has gone a long way. The number of Subscribers of almost all Youtube channels is increasing, so we will keep updating this list from time to time.